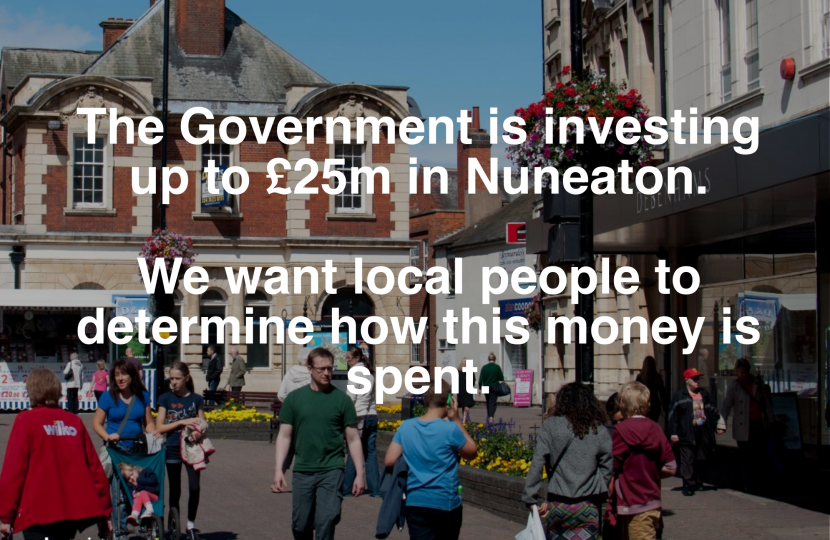 In September Boris Johnson and the Conservatives announced 100 towns that will receive extra funding to level up opportunities across the country and ensure places like Nuneaton can look towards the future with renewed optimism.

Launching the #MyTown campaign enables people to share pride in their town and contribute ideas on how the portion of the Prime Minister’s £3.6 billion Stronger Towns Fund, earmarked for Nuneaton, should be spent.

Worth up to £25 million, each of the 100 town deals will ensure that towns get the improved transport and broadband connectivity that they need to create more jobs and thrive.

“I am delighted that Nuneaton was selected as one of the towns to receive a share of the £3.6 billion Stronger Towns Fund, and that as much as £25 million will go towards transforming our town’s economic growth prospects.

"Local residents know what is best for Nuneaton and I would encourage people to have their say on the new dedicated Facebook page www.facebook.com/MyTownCampaign/ and on Twitter through #MyTown.

“This government is going further than any government before to level up every corner of our country. It’s fantastic for Nuneaton and the rest of the Borough that we will be among the places to benefit, and that the community has an opportunity to shape the next chapter in the town’s history.”

“Every town has its own story and we are supporting people across England to write the next chapter.

“We are investing up to £25 million in 100 places and I want to hear what local people think will make the biggest difference to their lives.”

It is shocking that Labour-run Nuneaton Council has chosen to hoard over £3.1 million of the £3.7 million given to them by the Government to support local businesses.